A detailed report (140 pages) was released last week. You can download it by clicking this link (warning, this is a 17.4 MB PDF report on the “Como Park Regional Pool Replacement”) It might take 10 minutes or more to download.

This report now goes to the Parks & Recreation Commission who will meet July 15 at 6:30 pm. at Hazel Park. I believe citizens will be allowed 3 minutes to voice opinions about the Como Park pool replacement plan.

The Parks & Recreation Commission then makes a recommendation to the Mayor of Saint Paul. The Mayor looks at it and judges whether it meets the Park’s Master Plan guidelines. The Mayor then sends the plan to the Saint Paul City Council who has the funding authority to pay for the project.

Where is the money coming from for the Como pool?

Money to pay for the Como Park pool replacement was to come from C.I.B. funds. My understanding is that Capital Improvement Budget funding is borrowed money. Bonds are sold to raise this money, then must be paid back from taxation.

Starting in early 2009, the CIB Committee began the process of developing the 2010 and 2011 capital budgets by reviewing project proposals submitted by City departments, district councils, and neighborhood organizations.

The CIB committee recommendation was to limit borrowing to about $20 million. Their rankings and how they were ranked is explained on the City of Saint Paul web site.

Did the Como Pool Replacement make the cut?

According to a PDF download titled “2010 – 2011 CIB Tentative Recommendations.pdf” on a District 10 webpage Como Pool Replacement was not included for funding
I think this complicated process is only to provide advice. I believe Mayor Coleman can choose to propose a budget differing from the CIB committee’s recommendations. Will he? That step is scheduled for Aug 5 or 12? 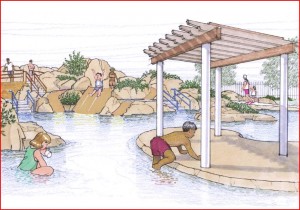 Several Como Park residents, including the two members on the Pool Design Task Force who voted “No” to the proposed plan, feel that the public needs to know what is being proposed and have the opportunity and the time to react. These quotes are from some e-mails:

*It appears that mega-development is being pushed with no direct public input opportunity to react to these plans.

*The Task Force process was flawed . . . No discussion was made of other sites and their merits (or lack thereof) . . . Como Park is featured out, struggling to deal with the features that already exist.

*Important questions related to the pool design remain unanswered. Chief among them are:

*I think it is VITAL that those interested in Como Park, the comoparkalliance etc. consider finding ways to:

4 replies on “Will the Como Park swimming pool survive the budget cuts?”

If you prefer google maps use this link to find Hazel Park.

I really liked most of the designs for the pool due to the increased vegation and listened to the German’s natural plan that sounded super (cheaper long term).
It appears most of the complaints have to do with cars in the above comments. Perhaps charging for parking or a ramp or speed bumps is really the issue- especially on weekends. Cars are not very neighborhood friendly- my next door with 3 kids drives like a maniac down my street. Go figure. Whoever wrote what about other areas of the park hasn’t live here long to watch all the money going to other improvements in the park. Due to budget cuts the remodeling years ago was cut to a Kiddie Mushroom Pool.
I look forward to lap swimming at Como next year- lap swimmers are locals so its truly a community asset for us.

I liked the designs as well, but I feel they are more suited to a different location. I feel the park is getting over developed with attractions instead being the attraction itself. There is already too much traffic, especially on weekends and this will only add to it. I’d like to see a nice neighborhood pool (including lap pool) for the locals to use. Not a huge attraction that will bring in hordes from the 7 country area.

Lovely designs notwithstanding, the Como Park neighborhood simply does not have the infrastructure to support this luxury. For example, I am unable to invite visitors to my home on the weekends or durin day-time hours during the spring, summer, or early fall because of the parking and traffic congestion resulting from visits to the already-exisitng attractions at Como. In addition to inconvenience, visitors park in front of the fire hydrants on a daily basis, presenting a safety hazard to my home; no car ever has been ticketed despite this regular occurrance.

I also question the goal of having this type of facility in this location. Como is a historic park, one whose history centered on providing urban residents with a connection to nature. Amusement centers, like a water park, are not in keeping with the intention of this historic resource.